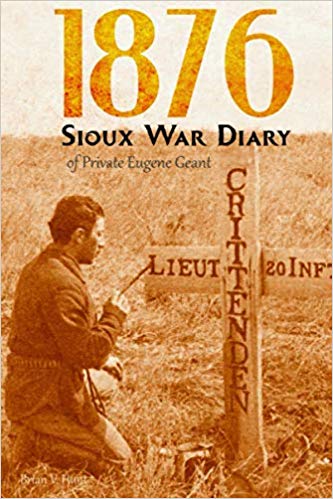 Battle of the Little Bighorn, 1876. It was a summer that changed the course of history for two peoples: white Americans and Native Americans. Private Eugene Geant was there, marching across Montana Territory with General John Gibbon and the 7th Infantry to connect with the famed 7th Cavalry and Lieutenant-Colonel George Armstrong Custer. Geant was with Gibbon on June 27, 1876 when they came upon the horrific scene of Custer’s disaster on the bluffs above the Little Bighorn River. The young private recorded the shock that everyone felt and the trials of getting the wounded to the steamboat Far West.Before that, Geant recorded the harsh conditions they endured marching hundreds of miles from Fort Shaw, up and down the Yellowstone River, to the Little Bighorn, and home again. Through snow, fearsome heat, pouring rain with no tents, starvation rations, and scores of river crossings, the soldiers kept their humor.