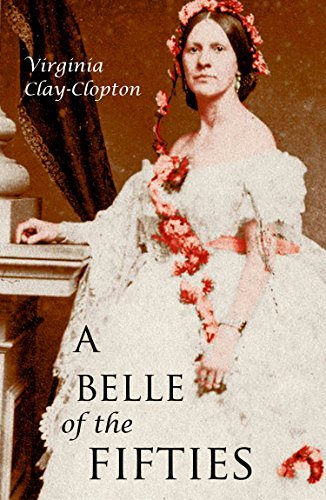 She knew everyone and everyone knew her. A wealthy belle, married to prominent legislator, Clement Clay, she became one of Washington, D.C.’s great hostesses and then prominent among Confederate women in the Civil War.

This is as witty, gossipy, fashionable, and gritty a tale of antebellum Washington as you’ll ever read. As her biographical researcher stated:

“I have come upon no record of any other woman of her time who has filled so powerful a place politically, whose belleship has been so long sustained, or whose magnetism and compelling fascinations have swayed others so universally as have those of Mrs. Clay-Clopton.”

Excerpt from A Belle

IN the winter of ‘59 and ‘60 it became obvious to everyone that gaiety at the capital was waning. Aside from public receptions, now become palpably perfunctory, only an occasional wedding served to give social zest to the rapidly sobering Congressional circles. Ordinary “at-homes” were slighted. Women went daily to the Senate gallery to listen to the angry debates on the floor below. When belles met they no longer discussed furbelows and flounces, but talked of forts and fusillades. The weddings of my cousin, Miss Hilliard, in 1859, and of Miss Parker, in 1860, already described, were the most notable matrimonial events of those closing days of Washington’s splendor.