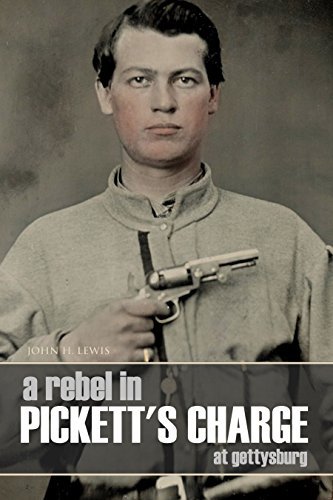 John Lewis fought for Virginia in the Confederate army at Malvern Hill, Antietam, and elsewhere. But it was at Gettysburg that the most searing experience of his wartime career took place.

He charged with Pickett’s Division behind General Lewis Armistead across that now-fabled field towards the center of the Union line. With great pride and seemingly no lasting bitterness, John Lewis recalls that fateful day and all his other days in a butternut uniform.

Excerpt from the narrative

All was quiet; we had cleared the woods, and advanced about 200 yards. (We had about one mile to go before reaching the Federal lines.) Suddenly about fifty pieces of artillery opened on our lines. The crash of shell and solid shot, as they came howling and whistling through the lines, seemed to make no impression on the men. There was not a waver; but all was as steady as if on parade. Forward was the command, and steady, boys, came from the officers, as we advanced. Crash after crash came the shot and shell. Great gaps were being made in the lines, only to be closed up; and the same steady, move-forward; the division was being decimated.