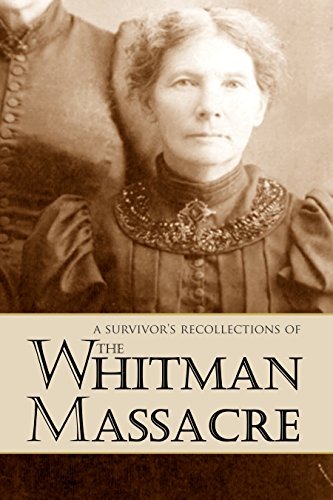 Even had she not had the unfortunate fate of being a witness and survivor of the Whitman Massacre in 1847, Matilda Delaney’s life was full of adventure from beginning to end. In this rare volume, she left her account of that tragic event in the pioneer west.

Only a child when her parents headed west in 1844, she and her siblings were orphans before they reached Washington. Marcus and Narcissa Whitman adopted and cared for them at the Whitman Mission until the sad day in 1847 when Matilda witnessed their murders.

Excerpt from A Survivor’s Recollections

The morning of the 29th of November, 1847, was a dark, dreary day. When I came downstairs I went into the kitchen where Dr. Whitman was sitting by the cook-stove broiling steak for breakfast. I went and put my arms around his neck and kissed him and said, “Good morning, father,” as we were taught to greet older persons with all politeness; also to say “Good night” to all as we retired. I continued, “I have had such a bad dream and I woke frightened.”

“I dreamed that the Indians killed you and a lot of others.”

He replied, “That was a bad dream, but I hope it will not occur.”