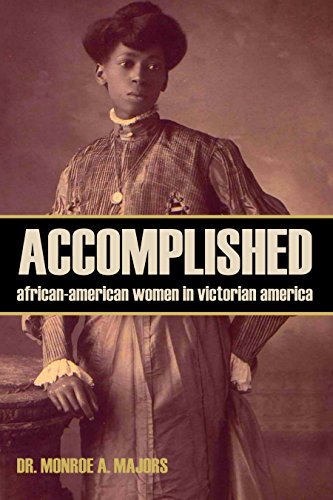 “A race, no less than a nation, is prosperous in proportion to the intelligence of its women.” (M.A. Majors, 1893)

Reconstruction after the Civil War was a fraught with overwhelming new challenges for millions of African Americans, not all of whom were recently-emancipated slaves. The next 100 years would see a struggle for American citizens to claim full citizenship and to end the reign of terror that accompanied emancipation.

Yet flourishing in this cauldron of oppression were people who, despite being held down not only because of their race but also because of their sex, succeeded beyond what their birth circumstances would have predicted. They were businesswomen, teachers, doctors, lawyers poets, singers, agitators, scientists, and mathematicians.

The Atlanta Constitution of August 6, 1915 reported under the headline COLORED PEOPLE WILL HAVE MUSIC FESTIVAL TONIGHT, that the sixth annual such festival would take place at the Auditorium Armory. Over 200 voices would be heard, among them soloist Rachael L. Walker of Cleveland, singing “Lo! Hear the Gentle Lark.” The article notes that she had just returned from 17 years abroad, during which she sang for the king and queen of Spain and other royalty. Whether she was home from abroad for the 1900 census or she just used her brother’s home as a permanent address is unknown.

It also notes that this is Rachael’s first visit to the south. In the midst of the horrific era of Jim Crow, the article states, “Every year large numbers of white people attend these festivals. Quite a number have already purchased tickets.” How did the ticket sellers know this? Because the seating was segregated. It goes on to say, “Five hundred seats have been reserved for [white people] on the Gilmer Street side.”

No white American can truly understand the depth of the humiliation and shock of performing for kings and queens, staying in nice hotels, being celebrated, and then coming home to the suffocating injustice of Jim Crow.