Who Was S.W. Cushing? 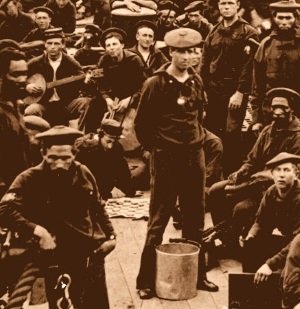 The individuals pictured here evoke a range of emotions. They seem to have a world of experiences written across their sullen faces and they probably did have many a story from many a port. They were Victorian sailors and part of U.S. Navy history.

Enlistment in the U.S. Navy of the mid-19th century was a rough way to make a living. No one knew that more than S.W. Cushing (not pictured here), who served at sea from 1832 to 1846. He published a memoir of his naval service in 1857 and what is remarkable about it is it doesn’t read like the scribbling of a barely-educated seaman. It is articulate and filled with verifiable facts about events in which he purports to have participated.

In republishing this very interesting book, I wanted to include biographical material about Cushing and I personally wanted to know what happened to him later in life.

He wrote that he was born on September 1, 1818 in Boston and that his father died “in my sixth year.” There is only one “S. Cushing” born in Boston in 1818 for whom I could find records that fit many of the criteria of the story. He is variously listed in census records as Stillman or Stephen.

Three times in the manuscript, Captain Marks refers to our author as “Wad.” I thought this might be a nickname based on his middle name or some kind of nautical slang. A search through a dozen slang references turned up nothing remotely close to that. I searched records for names like Wadleigh, Wadley, Wade, etc. from Massachusetts, but none fit the correct years or they had a first name that did not begin with “S.”

At times I wondered if this was a work of fiction and that the author’s name was a pseudonym. There were many Cushings in Massachusetts during the period in question (1818-1857), including some of the Boston Brahmins. But the work has a ring of truth and the author has his facts straight as to the several important historic events he was part of and people he met. The more I researched the facts he mentions, down to locations of buildings in Boston and elsewhere, the more real the story seemed. And he certainly knew the nautical life. It’s difficult to believe he didn’t live what he wrote about. 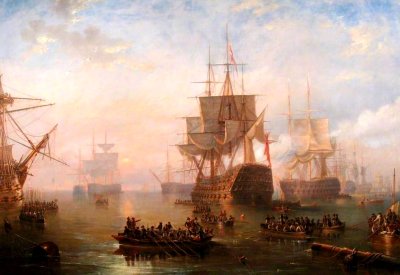 HMS Victory, upon which Lord Nelson died and S.W. was later imprisoned.

He didn’t state where his father died but there was a Samuel Cushing who died in Boston on February 08, 1824 of “intemperance.” For those who are unfamiliar with the Victorian connotation of this word, he died of alcoholism. This Samuel must have been a dedicated drinker, as he was only 37 at the time of death, although he could just as well have died from pneumonia or some other complication of “intemperance,” including violence. But I could find no relatives of this Samuel Cushing listed.

Returning home in 1832 to Boston from an exile intended to dissuade him from his seafaring ambitions, S.W. found his mother had remarried but he didn’t share her new married name. Seeing that he still persisted in his desire to go to sea, she sent him with a letter to a U.S. Navy officer who agreed to take him on ship after asking him some questions, one of which was how old he was; he was thirteen.

Instead, he hired onto a fishing boat. When the fishing season ended, he decided to visit the folks in Boston. He arrived, he wrote, on the day of his eldest sister’s wedding, a Sunday, and indeed, on December 16, 1832 (a Sunday) an Elizabeth Margaret Cushing was married to Issac Hall in Boston. Born in 1810, Elizabeth Hall died in Boston in December of 1887 of “cerebral apoplexy,” still married to Issac. Her death record states that her mother’s name was also Elizabeth, who had been born in Hingham, Massachusetts.

A side note: the Boston Courier reported several marriages in its December 17, 1832 edition. The only one for which it felt compelled to list the ages of the bride and groom was the marriage of “Mr. Issac Bouy, 17, to Miss Sarah Monka, aged 35.” Good on ye, lassie.

During S.W.’s other adventures on the high seas, he helped smuggle goods into Haiti, fought for Texas independence in the Texas Navy (didn’t know they had one but they did), and lost a leg in battle in South America. All of the events he mentions are easily verified. A comrade he mentions in the Texas Navy, Thomas Lewis, does appear in the Texas naval rosters for the period, as does a Samuel Cushing.

WHO IS OUR BOY? 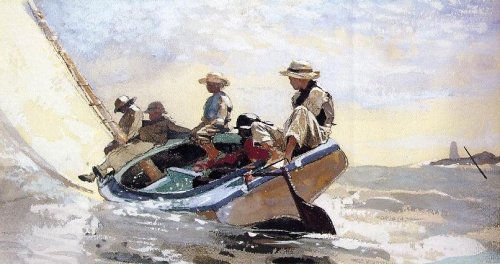 But our protagonist ultimately remains elusive. I have a request into the records office in Boston, which may be satisfactorily satisfied within my lifetime. They are very busy. There are other clues to his identity in the book but as yet, I cannot connect them all up in a neat package and say, “Ah ha! Here is our boy.”

The book was originally published by Daniel Fanshaw in New York. Fanshaw was an early enthusiast of power printing and held the exclusive rights to the Treadwell press in New York. He was an expert in the use of stereotype plates (Nord, 2004). Fanshaw was the main publisher for many years for the American Bible Society. Millionaire Fanshaw died in 1860. Three years prior, S.W. Cushing was able to get this prominent bookmaker to bring his autobiography to the world, indicating connections that few ordinary seamen of the time would possess.

All of this is immaterial to the enjoyment of the book. It is a funny, exciting, rollicking tale of a man who knew how to tell a good story. You needn’t be a sailor or a sailing fan to dive into it. You just need a sense of adventure.

To read the whole story, here it is: 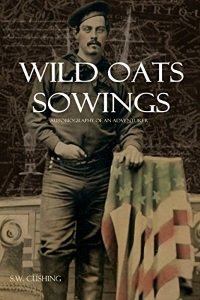