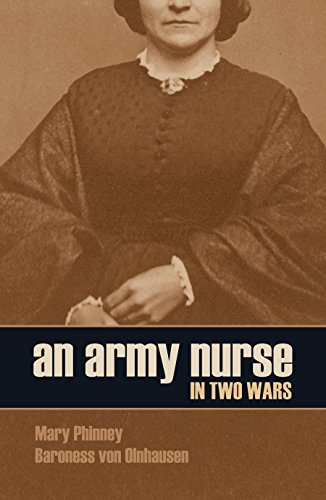 Her life has been wonderfully fictionalized on the hit PBS TV series, “Mercy Street.” Here is Mary Phinney’s real life in her own words, long prized by historians as a source about Civil War medicine.

American Mary Phinney was ahead of her time. A rebel against the restrictions placed on women of her day, the sad death of her husband, the Barron von Olnhausen, proved to be the real beginning of her life.

Upon the outbreak of the American Civil War, this remarkable woman enlisted herself in the care of sick and wounded soldiers. Working with Dorothea Dix and other notable women of the Civil War, she tirelessly worked to improve the sanitary conditions, medical care, and morale of shattered young men.

These men are all of the Eleventh Corps, and every one was shot in the first moments of the attack. They are all Germans but one, and he is Irish. I don’t believe he ran; he is a spunky little fellow and bears pain “bully.” He always smiles when I dress his wound, and only grits his teeth a little when I stuff the lint in. Next to him lies the hero of the ward, a little German boy of seventeen. A piece of shell struck him just by the lower part of the right ear, glancing upward a little, ploughing through the cheek to the bone, and cutting off the end of the nose. It is almost impossible to give chloroform to patients when the mouth is being operated upon, and he said he did not care for it; so they performed without any.