“The negro in slavery, before and during the War, was lazy and idle—he will always be that—but he was simple, true, and faithful. What he has become since his emancipation from servitude is a queer comment on the effect of the liberty bestowed upon him.”

That quote comes from Louise Wigfall Wright’s 1905 memoir, titled A Southern Girl in ’61. Its pernicious and fictitious stereotype sadly persists in some quarters in the 21st century—that there was always something inherently missing in black capacity and initiative. Let’s examine a few factors around this construction.

It is probably not a stretch to state that most white Americans today have little knowledge of the accomplishments of African Americans in the period between total emancipation in 1865 and the Civil Rights movement in 1965. Even more so, the accomplishments of African American women of the Victorian age are shrouded in disinterest and misunderstanding.

The complex psychology intertwining slaves and slave-owners is too-little considered when examining America’s original sin. One cannot hold other human beings in bondage while viewing them as fully human. To do so would create disturbing cognitive dissonance for the owner. They could hardly deem themselves good Christians or morally complete.

While many Northern clerics argued there was no theological support for slavery, many a Southern author or diarist spilled ink to argue that they could find nothing in the Bible to condemn it; clearly they were looking, if for no other reason than to salve a troubled conscience. The blacks that Wright would have encountered after emancipation would have been those in the south who were already being legislated into another kind of slavery exemplified by Jim Crow.

African Americans also had to engage in complex psychological and emotional gymnastics to survive. Whites in later years reveled in telling how loyal their slaves were and how loved they were by them. Certainly, African American women who nursed and cared for multiple children of their masters would have genuine attachment to those offspring. And slaves had to hide all feelings that might discomfort their owners in any way. But slave narratives are full of longing for freedom and a better life.

One of the well-known strategies of psychological survival in captivity is subversion. Prisoners of war do it and so did slaves. Why would any slave work harder than minimally necessary for no compensation and no future promise of freedom? So they were branded lazy and idle.

All the more reason to admire and celebrate the courage and determination of these Americans. There are many accounts of the voracious hunger for education displayed by freedmen post-emancipation. We know that many slaves learned to read in secret before emancipation, despite the fact that it was illegal. Between 1865 and 1900, Black professionals were much more prolific than most Americans realize.

In 1893, Dr. Monroe A. Majors, the first African American physician in Dallas, TX., published Noted Negro Women, which we’ve republished as Accomplished: African American Women in Victorian America. In it, he listed the lives and accomplishments of scores of women professionals from singers to doctors to ministers. His own wife was a graduate of Oberlin College and Fisk University. Just a few examples of his subjects should whet your appetite for more:

Edmonia Lewis was born to an Afro-Haitian father and African-American-Ojibwe mother and educated at Oberlin College. She became internationally famous as a sculptor, working in Rome, Italy. Today she is on the list of the 100 Greatest African Americans. Among her most famous works are “The Death of Cleopatra,” “The Arrow Maker,” and “Hagar.” When Majors published this book, “Hagar” was a recent work valued at $6,000 or nearly $158,000 in 2015 dollars.

Nicknamed “The Double-Voiced Queen of Song” because of her soprano-baritone range, Batson was also called “the colored Jenny Lind” in reference to the famed Swedish opera singer of the time. Batson sang all over the world to great acclaim. Majors includes excerpts from many press accounts of her performances. 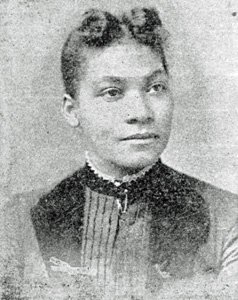 “In the city of Washington, where a few years ago colored women were bought and sold under sanction of law, a woman of African descent has been admitted to practice at the bar of the Supreme Court of the District of Columbia. Miss Charlotte E. Ray, who has the honor of being the first lady lawyer in Washington, is a graduate of the Law College of Howard University, and is said to be a dusky mulatto, possessing quite an intelligent countenance. She doubtless has also a fine mind and deserves success.” — “Women Lawyers” in Daughters of America, Hannaford, Phoebe A., 1883.

The dozens of other profiles in the book include missionaries, members of the Women’s Christian Temperance Union, actresses, musicians, teachers, and more. Dr. Majors not only did a great service to his African American sisters, he did a great service to the history of this nation. We need to do a better job of recognizing the talents and accomplishments of the men and women who made an extraordinary struggle against prejudice and discrimination, added much to their communities and country, and left an example for all of us to follow.