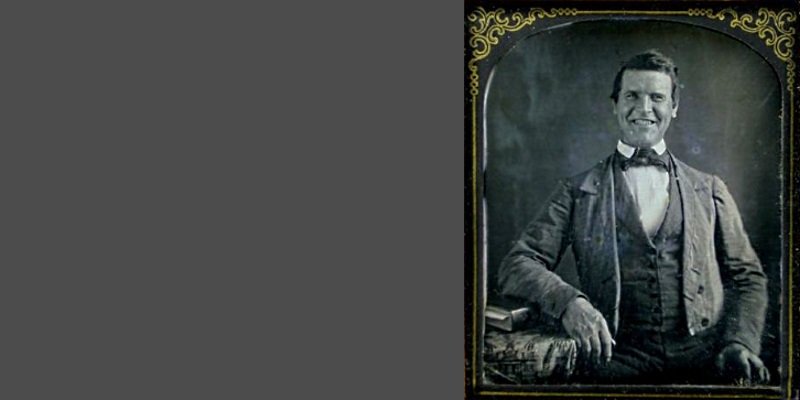 The image at the top of this post is rare. Victorians seldom smiled in photographs and almost never grinned. The reason is that long exposure times for early photographic equipment meant holding a pose for an uncomfortable stretch; the slightest movement meant a blurry photo. Try holding a smile for a minute or three. Civil War humor, however, was not rare at all.

Of his time in the 20th Maine under Joshua Lawrence Chamberlain, Theodore Gerrish, in his classic memoir, relates this story:

“Chaplain, will you be kind enough to tell me what the two capital letters, B.C., stand for, when they are printed together upon anything?

“O, yes. It means before the birth of our Saviour, previous to the beginning of the Christian era.” He proceeded to give quite a profound theological exposition of the matter, and then inquired, “Why did you ask so unusual a question?”

“O, nothin'” answered the innocent Dick, “only we have seen it stamped on these sheets of hard-tack, and were curious to know why it was there.”

Read enough written by soldiers and civilians of the period, and you come to realize that Victorian Americans were very much like Americans today, especially in regards to humor. 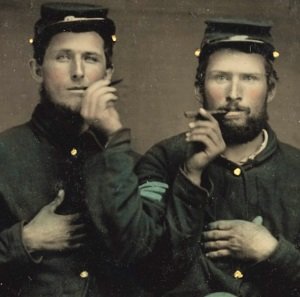 Another example is the photograph to the right. Keep in mind that many of these boys had never ventured far from home. They may have not ever had their picture taken before. The vast majority of soldiers had their portrait made with a weapon in hand or with a buddy next to them. The two soldiers in this photo decided to spend part of their $13-per-month wage on a photograph designed to make their comrades laugh, if not to get a chuckle back home.

Stephen Thompson, author of the official history of the 13th New Hampshire regiment wrote, “…the Thirteenth, as well as the army as a whole, laughed far more than it wept, and will remember its enjoyments far beyond the fading of its woes. Melancholy overdone is the most ridiculous of all drollery.”

Battle itself was often the source of laughter. Absurd situations and events abounded, and soldiers recorded them in their diaries, letters, and memoirs. An officer told of seeing one of his men knocked off his feet and temporarily stunned by a shot that glanced off the top of his skull. The officer was astonished to see the man jump up almost immediately and shout across to the Rebels, “You’re gonna have to aim lower than that if you mean to kill me!”

Sarah Morgan’s wonderful diary is full of humor, often at her own expense. A devoted Confederate, she nevertheless found much to admire in Yankees whom she met. She was also not above poking fun at a fellow “secesh.”

“Mr. M—, none of us fell desperately in love with. He is too nonchalant and indifferent, besides having a most peculiar pronunciation which grated harshly on my ears, and that no orthography could fully express. “Garb,” for instance, was distorted into “gairb,” “yard” into “yaird,” “Airkansas,” and all such words that I can only imitate by a violent dislocation of my lower jaw that puts Anna into convulsions of laughter—only she would laugh the same if it was not funny. This Kentuckian pronunciation grates “hairshly” on my Southern ears.”

Not even generals were immune from humor at their expense. General Horace Porter’s memoir of his time with Ulysses S. Grant is one of the best memoirs of the war. He told this story of Grant:

“The general was riding his black pony ‘Jeff Davis.’ This smooth little pacer shuffled along at a gait which was too fast for a walk and not fast enough for a gallop, so that all the other horses had to move at a brisk trot to keep up with him. When we were about five miles from headquarters the general said to me in a joking way: ‘You don’t look comfortable on that horse. Now, I feel about as fresh as when we started out.’

“I replied: ‘It makes all the difference in the world, general, what kind of horse one rides.’

“He remarked: ‘Oh, all horses are pretty much alike, as far as the comfort of their gait is concerned.’

“‘In the present instance,’ I answered, ‘I don’t think you would like to swap with me, general.’

“He said at once, ‘Why, yes; I’d just as lief swap with you as not;’ and threw himself off his pony and mounted my uncomfortable beast, while I put myself astride of ‘Jeff.’ The general had always been a famous rider, even when a cadet at West Point. When he rode or drove a strange horse, not many minutes elapsed before he and the animal seemed to understand each other perfectly. In my experience I have never seen a better rider, or one who had a more steady seat, no matter what sort of horse he rode; but on this occasion it soon became evident that his body and that of the animal were not always in touch, and he saw that all the party were considerably amused at the jogging to which he was subjected. In the meantime ‘Jeff Davis’ was pacing along with a smoothness which made me feel as if I were seated in a rocking-chair. When we reached headquarters the general dismounted in a manner which showed that he was pretty stiff from the ride. As he touched the ground he turned and said with a quizzical look, ‘Well, I must acknowledge that animal is pretty rough.’” 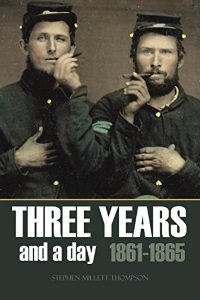