Custer’s Wolverines in the Civil War

“Come on, you Wolverines!”

With this spirited shout, young General George A. Custer led his Michigan cavalry into the Battle of Gettysburg in the Civil War. After his death at the Little Bighorn, Custer was at first lionized as a heroic martyr. In the early 20th century, his halo began to slip until by the 1970s, he was considered by some to have been a reckless butcher. Few Americans today think about Custer in the Civil War. Fewer still know the important role he played at Gettysburg. But his reputation as a reckless, glory-seeking commander who wasted his men’s lives was challenged by one of his own Wolverines.

CUSTER IN THE CIVIL WAR

Thirty-two years after General Custer died, Colonel James H. Kidd wrote a wonderful memoir of his time in the Sixth Michigan Cavalry Brigade. (Army custom dictates that an officer is addressed by the highest rank he ever held. Although Custer was a Lieutenant-Colonel at the Little Bighorn, he was the youngest Brigadier-General in the Civil War at 23 years of age.)

The college-educated Kidd was no hero-worshipper. He tells of a Custer who was methodical, who carefully planned his assaults. Custer’s bravery was unquestioned. He asked no one to go into a fight that he wasn’t willing to lead.

Always a bit of a dandy, with a love of fine clothing even in civilian life, Custer wore a bright red bandanna around his neck when leading troops. A flamboyant touch, no doubt, but it also made him easily visible to his troops. He also wore, at times, a velvet coat with gold piping and a broad-brimmed sombrero. The hat was more than fashionÂ in the sunny South for the fair-skinned boy-general.

Custer had distinguished himself early in the war as a fresh lieutenant just out of West Point, having graduated last in his class with one of the worst demerit records in the academy’s history. This would have earned him a posting to some obscure hell-hole had it not been for the war. Showing great bravery and leadership at the first Battle of Bull Run, he came to the attention of commander of the Union army, George McClellan, and was invited to serve on his staff. During this time he was promoted to captain. 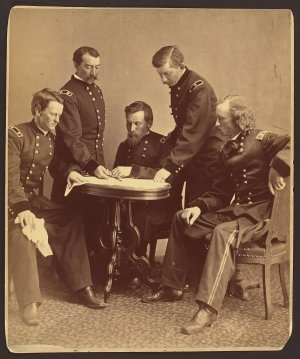 Custer was never a major or colonel. He advanced from captain in the Fifth United States cavalry to full brigadier general of volunteers (just three days before Gettysburg) and his first command was four Michigan regiments, constituting what was known as the only cavalry brigade in the service made up entirely of regiments from a single state.

At Gettysburg, Robert E. Lee attempted a three-pronged assault to dislodge the Union forces of General George Gordon Meade from Cemetery Hill. First, General Longstreet was to take Little Round Top on the south and drive the Union troops north. Second, cavalry general, J.E.B. Stuart, was to be ready to exploit infantry successes by attacking Meade’s right flank, some three miles east of Gettysburg. Third, General Pickett was to make a frontal assault with his infantry division and break the Union center.

Everyone remembers the disaster of Pickett’s charge, even though it did break the Union line temporarily. Only those who have read closely about that day are aware that Custer played a major role.

In the later battle of Yellow Tavern, which Phil Sheridan later said he believed was the greatest cavalry engagement of the Civil War, the Wolverines fought ferociously. J.E.B. Stuart was fatally wounded in the fight, and although it was a Union victory, it accomplished little. That entire raid deprived Grant of cavalry screening for a period of about two weeks during the Overland Campaign of 1864.

At Gettysburg, Brandy Station, the Trevillian Raid, Kilpatrick’s Richmond raid, and the Shennandoah Valley, the Wolverines played a crucial role in the Union victory.

Kidd knew how to write. He was able to convey a sense of action and drama without being melodramatic. He wrote one of the most compelling memoirs of the great conflict. 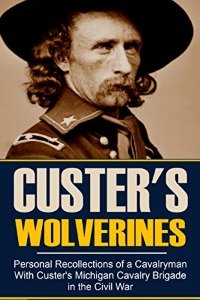