The Terrible Cost of Care

“‘A hospital is no place to form attachments,’ said one lady in this hospital to another. The former had surprised the latter in a sudden flood of tears, in the pantry of Ward 1. The occasion was the arrival of that order for the kitchen man, and chief wound-dresser, of said ward to report to their own State, New Jersey.

“Perhaps it is not wise to form attachments, but if they grow themselves, as between a mother and sick child, with every cry of pain, or bestowal of attention, what is one to do about it? It is quite inconvenient sometimes, I admit. But I would like to see one who is created with that troublesome thing, a heart, and who takes care of patients, from the time they are brought in just from the front, looking more like wild brigands from the mountains, or Indian trappers from the frontier, so far as hair or whiskers are concerned, but acting more like babies, or, it may be, like very sick but stout-hearted heroes, but who after they are bathed, provided with clean clothes and bed, and the superfluous hair and whiskers removed, turn out respectable-looking, civilized beings, up to the time when the departed appetite is coaxed back, and when by pleasant conversation, letter Writing and reading the relaxed nerves recover their tone and grim death is fairly beaten back, who at first had a mortgage upon them, let such an one have a care for the feet on scrubbing days, when they are able to sit up, and muffle them for a ride in the Sanitary carriage, to get a fresh breath and sight out of doors, the first for months, and just when she knows that a sudden relapse might take them away, to have an order come for a transfer to Quincy, Keokuk, or Washington, and she would probably, feel the ‘attachment,’ if she possessed that troublesome thing, a heart. And, by the by, I happen to know that this same Miss B. who gave the caution, has in possession a pretty good-sized article of the same kind herself.”

PTSD in the Civil War

Today we recognize just how important medical and support staff are in war. Most of us likely, however, don’t realize what providing that care costs the providers on a personal level.

During the American Civil War, there was initially great resistance on the part of male doctors to allow female nurses into hospitals. It was not considered a dignified thing for women to see young men in all manner of undress, even naked. And it was believed that the strain of seeing shattered bodies and oceans of blood would be upsetting to the point of making the women useless. The men came around. Eventually they came to see that women made excellent nurses in field and base hospitals. 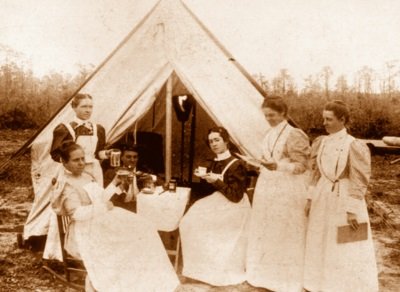 It is true, however, that many of the accounts written by nurses and surgeons acknowledged the emotional and psychological cost of their service. It was just considered something to be endured and was not put into explicit language. One of them was Elvira Powers. Her story is staggering in its depiction of sacrifice and care.

One of the ways that Elvira coped with the stress of administering to sick, wounded, and dying young men was to keep a diary. She called this “Tired nature’s sweet restorer.” In it, she notes her sorrow, fears, and shared laughter while caring for her boys in the ward.

Thirty-four and married at the outbreak of war in 1864, Elvira had no previous medical training. Her parents were dead by the time she was 20 and she helped raise siblings. Her husband, Edward, and she had four children. They all had died before the war. It’s a wonder she could take the emotional risk to be with boys in war.

When war did come, her husband enlisted as a private in the Fifth Vermont Infantry and served through the war. Elvira went to Jefferson Hospital, the 3rd-largest Union facility, in Indiana.

Like all nurses, she dealt with hospital bureaucracy as well as illness and wounds:

“Several wounded men who are obliged to lie in bed all the time, have been for some time sadly in want of hair matrasses [sic]. There are a plenty in the store-room, but they have refused the request of the ward master and nurse, even with the order of the surgeon. They say they are keeping them against the arrival of other patients. But four of my boys were suffering so much for them I obtained the order from the surgeon, went to the store-room and left the order, and a request that I might be allowed to send down my own mattrass which one of the elder ladies had managed to obtain for four of us in case we could not get those at the store-room, to the surgeon-in-charge Dr. Goldsmith. The clerk would not let them go, without first seeing him, but in about two hours the clerk came over to give the ward-master a piece of his mind for letting a woman interfere in the matter. But he was reminded that the trial had been made by himself to no purpose, and I didn’t care how he felt about it when I saw the smiling faces and heard the warm expressions of the poor sufferers, when they were moved on their nice, soft beds.”

Civil War nurses in the North also cared for Confederate boys as well as Union. For both, Elvira composed letters to families and lovers. She copied some of them and quoted them in her diary, along with her often humorous editorial comments about them.

When we consider the pain Elvira had already endured through the loss of all her children, separation from her husband, and the strain of her work, it is unbelievable to then realize that she did this work with yet another burden…she had tuberculosis.

“The truth is, am getting ill again. Have been so sorry to see former symptoms all coming back, as it is a sign that I must leave the hospital.”

Even as she was dying, she was saving and caring for other lives. We are so fortunate that she could spend the time shortly after the war to compile and publish her wonderful journal. 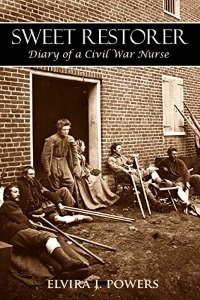