THE HUMAN SCALE OF HISTORY


It’s history at the human scale that I find so compelling. When I get to peer behind the frozen images created by the mythology around historic people and events, they come alive in a way I can relate to; in a way that stirs my emotions and makes me think, “I’d love to have sat down with this person.”

The image accompanying this post is of General Ulysses S. Grant and Cincinnati, one of a few horses he rode in the Civil War. The other horses were Jeff Davis and Egypt. Grant was a superb equestrian and a great lover of horse flesh. His aide-de-camp, Horace Porter, saw many sides of this taciturn general and shared them in his memoir, Campaigning with Grant.

“When the horse was brought up, the general mounted as usual in a manner peculiar to himself. He made no perceptible effort, and used his hands but little to aid him; he put his left foot in the stirrup, grasped the horse’s mane near the withers with his left hand, and rose without making a spring by simply straightening the left leg till his body was high enough to enable him to throw the right leg over the saddle. There was no ‘climbing’ up the animal’s side and no jerky movements. The mounting was always done in an instant and with the greatest possible ease.”

Grant couldn’t stand cruelty of any kind, against people or horses. A strange characteristic for a general who commanded some of the cruelest battles ever fought. One time, when he was first commanding all the Union forces, he and his aides came upon a teamster whipping some horses.

“Putting both spurs into Egypt’s flanks, he dashed toward the teamster, and raising his clenched fist, called out to him: ‘What does this conduct mean, you scoundrel! Stop beating those horses!’ The teamster looked at him and said cooly, ‘Well who’s drivin’ this team anyhow, you or me?’ The general was now thoroughly angered…’I’ll show you, you infernal villain!’ he cried, shaking his fist in the man’s face. then calling to an officer of the escort, he said: ‘Take this man in charge and have him tied to a tree for six hours for his brutality.'”

That evening, Grant brought the incident up, obviously still upset by it. “If people knew how much more they could get out of a horse by gentleness than by harshness, they would save a great deal of trouble both to the horse and the man. A horse is a particularly intelligent animal; he can be made to do almost anything if his master has intelligence enough to let him know what is required. Some men, for instance, when they want to lead a horse forward, turn toward him and stare him in the face. [The horse], of course, thinks they are barring his way and he stands still. If they would turn their back to him and move on, he would naturally follow.”

THE FUNNY SIDE OF GRANT

One of my favorite stories of Grant as equestrian comes from the same source. Porter was on a long ride with Grant and his escort, Porter on a borrowed horse that he found had a trot that caused a lot of “saddle pounding.”

“The general said to me in a joking way, ‘You don’t seem comfortable on that horse. I feel about as fresh as when we started out.’ I replied, ‘It makes all the difference in the world, general, what kind of horse one rides.’ He remarked, ‘Oh, all horses are pretty much alike, as far as the comfort of their gait is concerned.’

“‘In the present instance,’ I answered, ‘I don’t think you would like to swap with me, general.’ He said at once, ‘Why, yes; I’d just as lief swap with you as not,’ and threw himself off his pony and mounted my beast, while I put myself astride Jeff.

“In my exprience, I have never seen a better rider [than Grant] or one who had a more steady seat, no matter what sort of horse he rode; but on this occasion it soon became evident that his body and that of the animal were not always in touch and he saw that all the party were considerably amused at the jogging to which he was subjected. At the headquarters, the general dismounted in a manner which showed that he was pretty stiff from the ride. As he touched the ground he turned and said with a quizzical look, ‘Well, I must acknowledge that animal is pretty rough.'”

And it wasn’t just animals. Porter tells of Grant and his escort coming upon a straggler who had stopped at a house and assaulted a woman.

“The general sprang from his horse, seized a musket from the hands of a soldier, and struck the culprit over the head with it, sending him sprawling to the ground. He always had a peculiar horror of such crimes.”

Here are more stories of Grant in one of my favorite books about him. 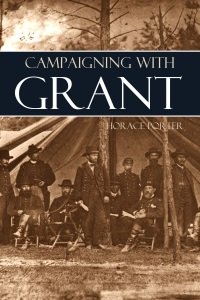