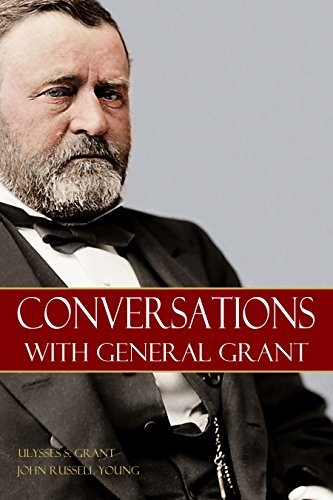 Reporter John Russell Young was invited to make the two year tour around-the-world voyage with former President Ulysses S. Grant and his wife Julia. He recorded conversations with General Grant talking about everything from politics to people he’d known. But the best of the conversations are on the men and battles of the Civil War.

Grant provides his thoughts on Lincoln, Sherman, Sheridan, Lee, Thomas, Longstreet and more. He discusses the siege of Vicksburg, the Battle of Shiloh, and the surrender at Appomattox.

“Lee, of course, was a good soldier, and so was Longstreet. I knew Longstreet in Mexico. He was a fine fellow, and one of the best of the young officers. I do not know that there was any better than Joe Johnston. I have had nearly all of the Southern generals in high command in front of me, and Joe Johnston gave me more anxiety than any of the others. I was never half so anxious about Lee. By the way, I saw in Joe Johnston’s book that when I was asking Pemberton to surrender Vicksburg, he was on his way to raise the siege. I was very sorry. If I had known Johnston was coming, I would have told Pemberton to wait in Vicksburg until I wanted him, awaited Johnston’s advance, and given him battle. He could never have beaten that Vicksburg army, and thus I would have destroyed two armies perhaps. Pemberton’s was already gone, and I was quite sure of Johnston’s. I was sorry I did not know Johnston was coming until it was too late. Take it all in all, the South, in my opinion, had no better soldier than Joe Johnston—none at least that gave me more trouble.”