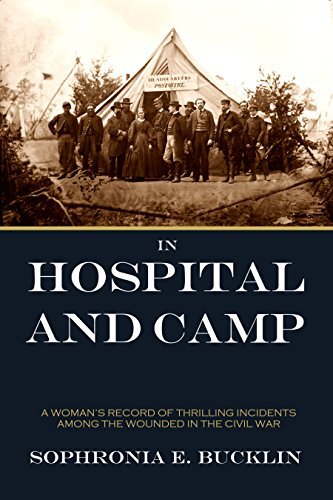 Sophronia Bucklin spares the reader no detail while humanizing what would otherwise be just statistics of casualties. She and her sister nurses cared for Union and Confederate, black and white, dressed their wounds and held their hands as they died.

Excerpt from Hospital and Camp

On the discharge of a nurse her ward was given to me, and in it I found the man who had begged for the piece of cake and been refused. He was too ill to be indulged with anything of the kind now, else in my compassion I would have fed him with the best food obtainable. He died in a short time after; and in the six hours following, another one lay dead in the same section of the ward. My heart throbbed with pain to see them dropping off one by one, and look over into the full graveyard, where they lay sleeping in long unbroken ranks.

These soldiers were of the first who were buried in the new National Cemetery at Gettysburg, and they were laid to sleep under that dewy sod with military honors. At their burial the coffins draped with the flag preceded, the ambulances containing the women nurses followed, and then came the convalescents marching with reversed muskets to the plats of ground set apart for the dead of the particular State to which the deceased belonged.