Why would any Native Americans help the whites to hunt the Sioux?

It seems strange, perhaps, that General George Armstrong Custer went to the Little Bighorn with Indian scouts in his entourage. In fact, there were many. And they had good things to say about Custer after his death.

From the Arikara (ah-RICK-ah-rah) tribe, there were about forty scouts. There were several Crow, among them the later-famous Curly, who was only seventeen in 1876. One of the most respected and trusted of the scouts was Mitch Bouyer, who was of mixed Sioux-French heritage. 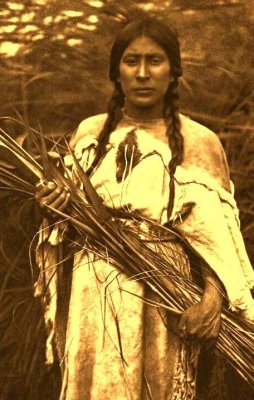 As in all human cultures, the enemy of my enemy is my friend. Sioux aggression against the Crow had driven them out of their land. Part of that land is the Little Bighorn Valley, which today is within the Crow Agency in Montana.

The Arikara (or Ree) were semi-nomadic and migrated to the present area of North Dakota because of pressure from the Sioux.

Mitch Bouyer, though partly of Santee Sioux blood, had married a Crow woman, for years lived with the Crow, and had worked often for the Army. General John Gibbon called him “next to Jim Bridger, the best guide in the country.” Bouyer’s sympathies lay with the Crow.

Custer’s favorite scout was an Arikara named Bloody Knife. Bloody Knife had no problem standing up to Custer when he got irascible and perhaps this is one of the reasons why Custer liked him. After the initial skirmish in the Little Bighorn Valley on June 25th, 1876, a shot to the head by attacking Sioux splattered Bloody Knife’s blood and brains all over Major Marcus Reno while Reno and his troops were in the woods preparing to make their mad retreat to the bluffs on the other side of the Little Bighorn. 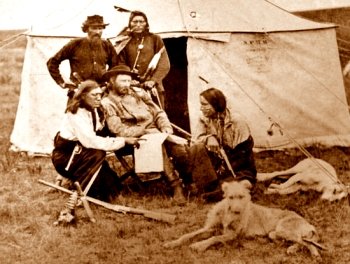 Custer with scouts and Bloody Knife

The scouts were generally not expected to fight with the army. Once they’d done their job of getting the troops to the Little Bighorn, their orders were to drive as many Sioux horses away from the village as possible and head back to the camp on the Powder River. Several, however, were wounded in the Valley fight or chose to stay and fight on Reno hill.

Bloody Knife was dead. White scout, “Lonesome Charley” Reynolds, had been killed in the Valley. Mitch Bouyer and Curly were with Custer and his five companies, riding toward eternity.

Bouyer had said to Custer early that morning that the forces he was about to attack were too many for the number of soldiers present. Custer dismissively told him he didn’t have to go. Bouyer replied testily, “I’ll go anywhere you go but if we go down there, we will wake up tomorrow in hell.”

Bouyer was killed with Custer and his remains were identified by archaeologists more than one hundred years later. Curly escaped and was the first to report the disaster to a disbelieving company of soldiers waiting at the mouth of the Little Bighorn, some 18 miles away. He appears on the book cover below in a photo taken some years later.

By 1912, only nine of the Arikara scouts were still alive. They were interviewed in their own language about the Little Bighorn expedition. The interviews make fascinating reading and are studied by every serious Custer scholar. 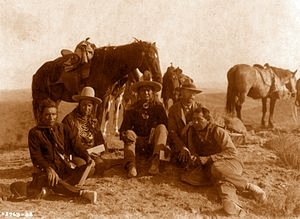 Old men by the time of the interviews, they likely had little to gain in painting an other than honest memory of the event. They tell of their experiences in graphic detail. For the most part, their remembrances of Custer are positive. The image to the right was taken at the Little Bighorn many years after the battle.

By the way, General Custer was a great lover of dogs. His orderly stated that at one time, Custer had eighty! He often had his favorites with him on expeditions. Note that two of them appear in the image above with Custer.