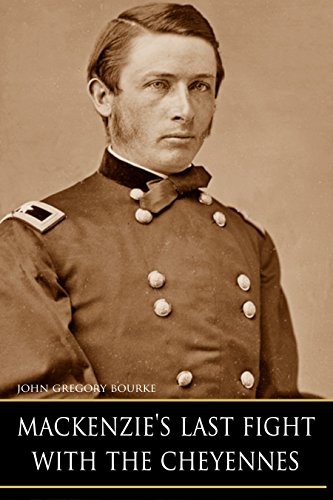 Once again, scholar Captain John Bourke brings his considerable skills to writing about a fight in which he participated…the 1876 attack on Dull Knife’s Cheyenne encampment with Ranald MacKenzie. In exciting detail, Bourke describes the approach to the village and the dramatic events that ensued. As with On the Border with Crook, Bourke’s writing puts you there.

Mackenzie, to whom the cavalry arm of the expedition had been assigned, was looked upon by the whole army as the embodiment of courage, skill and dash in an eminent degree. Impetuous, headstrong, perhaps a trifle rash, he formed a curious contrast to his self-poised, cool, silent commander whom the Indians of the plains and mountains from the British line to Mexico had learned to know and respect as the “Gray Fox.”

Before the cheers from the whites and their Indian allies had died away, there issued from the Cheyenne line a young warrior gorgeous in his decorations of feathers, mounted upon a spirited pony, and bearing also upon his left arm a shield of buffalo hide, hardened in the fire and decorated with the plumage of the bald-headed eagle. This brave Cheyenne charged recklessly into the face of death, scorning the bullets which made the air hot about him, and chanting loudly the war-song proclaiming his determination to save from profane hands the corpse of his comrade and friend. On he flew, whipping into more energetic movement the faithful beast whose instinct warned it of imminent peril. Much sooner than it has taken to write this paragraph, he was bending over the bleeding form of the red-skinned Ajax, whose defiance was still sounding in our ears.