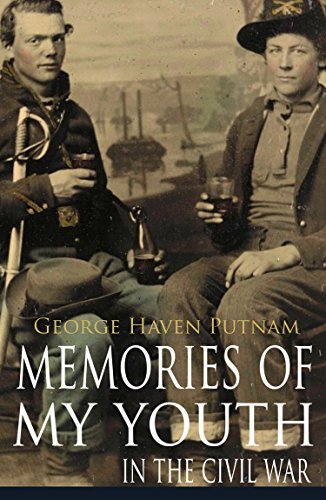 George Haven Putnam was the son of the founder of the great Putnam publishing empire. When the American Civil War erupted, seventeen-year-old George was in Germany and chafing to get back to the U.S. Born in England, he was not yet a citizen but was ready to fight for the Union.

The slight Putnam enlisted as a private soldier. “The surgeon remarked that there was not very much of me but that what there was good.” Within weeks he was promoted to sergeant and eventually to first lieutenant.

Seeing much combat, his arm was eventually disabled and he was captured at the Battle of Cedar Creek while with General Phil Sheridan’s forces. He spent months in Libby Prison before being released at the end of the war, an account that could have been a book in itself. On his 21st birthday he was “busy in North Carolina assisting General Sherman to secure the surrender of the last army of the Confederacy.”