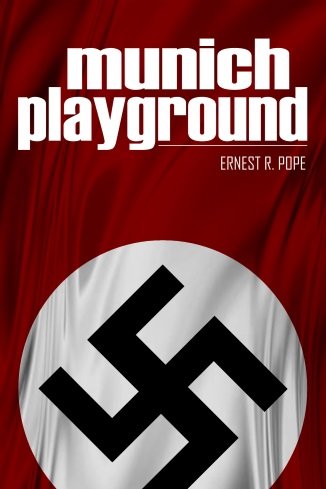 As senior correspondent for Reuters in Munich from 1936-1941, American Ernest Pope saw the cruel and outrageous behavior of Nazis in their native habitat. In Munich they ran wild, let their hair down, and indulged in every fantasy money and power could avail them. Pope has all the gossip…and the confirmed stories.

Naturally I was annoyed when the Gestapo listened to my telephone conversations with my girl, and it exasperated me to be held up by the Geheime Staatspolizei when I had an important story to rush to London. I regretted forcibly having to push some of Himmler’s SS Black Guards out of my way when they refused to let me cross a street along which the Führer was due to pass any time within the next half day. I hated to miss my dinner because a Gestapo commissar insisted on asking a thousand foolish questions. And I was both incensed and sad when four of them carted off my Jewish landlady.

I have seen the leading actors in the Nazi tragedy, playing their parts on the Bavarian stage. Long before the climax, the outbreak of the war, I knew what the denouement in Hitler’s theater would be.