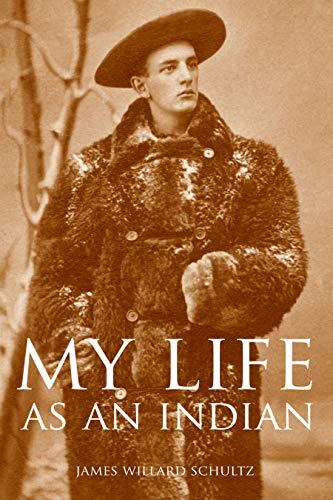 Beautiful, tender, haunting, and extremely exciting, this is the memoir of famed author, explorer, guide, trader, and historian of the Blackfoot Indians, James Willard Schultz. Here he tells of his life with the Blackfeet and his marriage to a Blackfoot woman, whom he deeply loved. From 1880 to 1903, Schultz lived the life of a Blackfoot Indian with Nat-ah’-ki and her people. During this time, he began writing for magazines, at times running a trading post, and working as a guide in the West.

“From the present book, it is quite clear that even four years after the death of his first wife, Mutsiawoten Akhi (Fine Shield Woman, 1862–1903), whom he called Nat-ah’-ki, he still keenly mourned her loss. His friend, Harry C. James, later wrote that Schultz never recovered from Nat-ah’-ki’s death. He tells her story with such reverence and affection that the reader cannot keep from feeling the same for her. In Indian census records, she is recorded as Susan or Suzie Schultz. James Schultz was given the name Apikuni, which means “Spotted Robe” in Blackfeet.” (Publisher’s Notes)