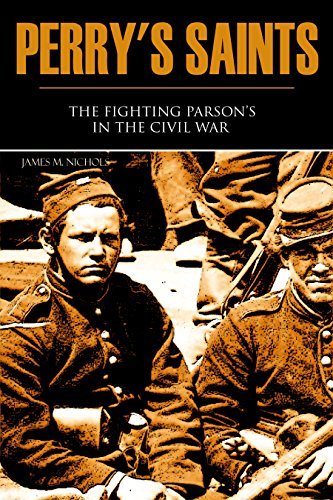 A fighter from his youth, a graduate of West Point, and a veteran of the Texan fight with Santa Ana, James H. Perry was no shrinking violet. But when he killed an honorable Mexican commander by mistake, he resigned his commission and turned to the ministry.

When Fort Sumter was fired upon, Reverend Perry proclaimed, â€œI was educated by the government; it now needs my services. I shall resign my ministry, and again take up my sword.â€

Perry led the 48th New York Infantry, Perry’s Saints, through some of the fiercest fighting of the war. Though many officers and men were very far from being saint-like in tastes or disposition, there were a number of “fighting parsons” among them.