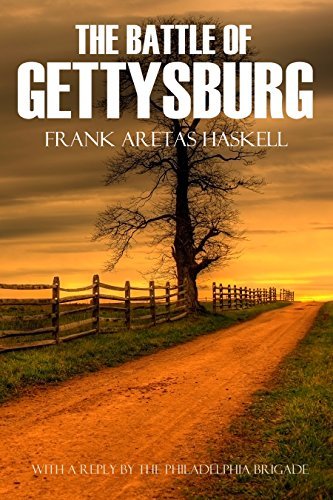 Frank Haskell’s famous account of Gettysburg was written as a letter to his brother just shortly after the battle. It was published after Haskell’s death at Cold Harbor, quoted in the autobiography of his commander, General John Gibbon, and used in Ken Burns’ celebrated documentary on the American Civil War.

As I looked upon those interminable rows of muskets along the crests, and saw how cool and good spirited the men were, who were lounging about on the ground among them, I could not, and did not, have any fears as to the result of the battle. The storm was near, and we all knew it well enough by this time, which was to rain death upon these crests and down their slopes, and yet the men who could not, and would not escape it, were as calm and cheerful, generally, as if nothing unusual were about to happen. You see, these men were veterans, and had been in such places so often that they were accustomed to them. But I was well pleased with the tone of the men today—I could almost see the fore-shadowing of victory upon their faces, I thought. And I thought, too, as I had seen the mighty preparations go on to completion for this great conflict—the marshaling of these two hundred thousand men and the guns of the hosts, that now but a narrow valley divided, that to have been in such a battle, and to survive on the side of the victors, would be glorious. Oh, the world is most unchristian yet!