What did the soldiers who engaged Native Americans in the 19th century think about what they were doing? It’s a question we might ask of any war, not just the Indian Wars, but I think it’s often assumed Indian fighters of the Old West were enthusiasts for the policies of the American government of the 19th century. You may be as surprised as I was when I started reading many of their memoirs, that this was not so.

There were, of course, plenty of soldiers who neither thought about policy, nor cared about it. It was a job. And there were soldiers who felt the policy of subjugation and consignment to reservations was correct and inevitable. Certainly General William Tecumseh Sherman was one of those.

A surprising number of the officers who had to do the fighting and lead the ranks did not agree. Here are some of their quotes.

“From my experience of late years, I can state unhesitatingly that…the prime cause [of war] has been either the failure of our Government to make good its pledges, or the wrongs perpetrated upon [the Indians] by unscrupulous whites…That the Indians are often robbed of their rations, and of the goods provided by the Government for their subsistence and support, by rascally Agents and other unscrupulous white men, is a fact within the knowledge of anyone having relations with them….I have no knowledge of a case in record where a white man has been convicted and punished for defrauding an Indian.” Gen. George Crook

Crook was a commander in the Snake War, the Great Sioux War, Geronimo’s War, and other actions. He helped carry out policies that he felt were not only wrong but counterproductive. Yet, like his colleagues, he participated as an instrument (an effective one too) of that policy.

Of Crook, the great Sioux war chief Red Cloud said, “He, at least, never lied to us. His words gave us hope.” Crook was known to them as Grey Wolf. He spent his last years speaking out against the unjust treatment of Indians.

A Word for Justice

One of the most eloquent soldiers on this topic was General John Gibbon. He had a distinguished record from the Civil War and led the Montana Column that was supposed to unite with George Custer at the Little Bighorn. The next year (1877) he was in the Nez Perce War and in 1886, as commander of the Colombia Department, he placed my home town of Seattle under martial law during anti-Chinese riots (I wasn’t there at the time). 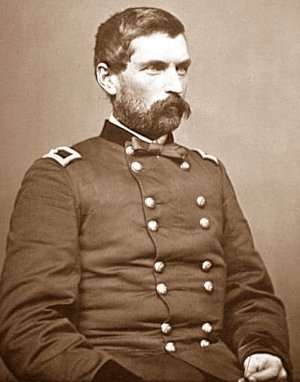 “How do you ever avoid war? It can be avoided sometimes by the exercise of a spirit of concession and justice, a spirit directly opposite to that which has universally characterized the treatment of the red man of this continent by the American people…the great wonder is, not that we have had so many wars, but that we have had so few.”

“None will dispute that his country has been overrun and taken from him for less than a ‘mess of pottage’ and few will deny that the game on which he depends for subsistence is recklessly destroyed by the white man, so that in a few years more it will have entirely ceased to exist…agents retire from their positions enriched by the spoils from the agencies, none of these agents are ever brought to punishment, while the Indians are left to suffer for the actual necessaries of life…even a Christian will fight before he will starve.”

Captain Frederick Benteen, a hero of the survivors at the Little Bighorn battle, later wrote of the Indians, “We were at their hearths and homes; they had gotten the bulge on Reno; their medicine was working well, and they were fighting for all the good God gives anyone to fight for.”

And even George Custer himself wrote in his book Wild Life on the Plains that if he were an Indian, he would much prefer the life on the open plains to one confined to a reservation, no matter how large.

In the sad legacy of the treatment of native peoples on this continent, it is somewhat reassuring of humanity that the men who did the fighting tried, however unsuccessfully, to influence the policies that they were charged with carrying out.