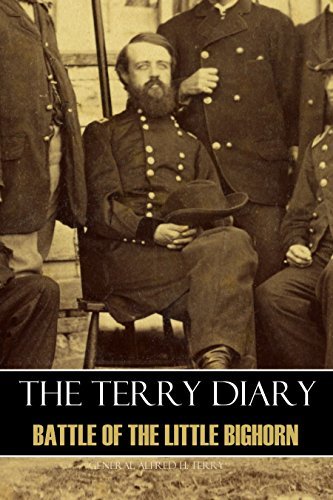 General Alfred Terry was commander of the 1876 Yellowstone Expedition that cost the lives of George Custer and over 200 of his 7th Cavalry. This is Terry’s diary of that summer, detailing among other things, his frustrations with Custer and Reno before the disastrous fight. Included is Terry’s official report of the disaster.

A distinguished Civil War veteran, Terry’s legacy would be that of having intervened to have Custer restored to command of the 7th Cavalry in time for the 1876 movement against the Sioux and Cheyenne. Terry’s orders to General Custer before his departure for the Little Bighorn are still being debated in the 21st century.

No less person that President Ulysses S. Grant did not want Custer on the expedition. He was irritated with Custer for having given testimony to Congress, which was little more than hearsay, about corruption in awards of contracts to supply forts—testimony that not only implicated Grant’s Secretary of War, William Belknap, but Grant’s brother Orvil as well. Generals Terry and Philip Sheridan interceded on Custer’s behalf and Grant acquiesced to Custer’s taking command of his regiment. Terry would command the expedition and Custer was ordered not to take any reporters with him. He was accompanied by reporter Marc Kellogg, who died near Custer Hill.