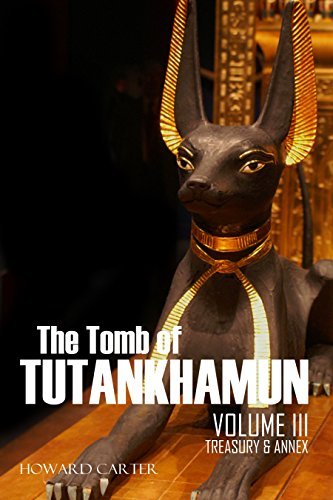 In this third and final volume of Howard Carter’s classic work on his historic discovery of the tomb of Tutankhamun, he gets down to the details of the objects contained in the Treasury and the Annexe. Neither of these chambers had escaped the attentions of the tomb-robbers who had entered the tomb in antiquity. As Carter describes, both rooms had objects that suffered at the hands of the robbers (and probably the officials charged with resealing the tomb).

Such were the general contents of this little room beyond the Burial Chamber. But a single glance sufficed to show that the principal object of all was at the far end, facing the doorway. For there, standing against the east wall, and almost reaching the ceiling, was a large gilded canopy surmounted with rows of brilliantly inlaid solar cobras. This canopy, supported by four square posts upon a sledge, shielded a gilt shrine-shaped chest inscribed with formulae pertaining to the four genii, or children of Horus. Surrounding this shrine-shaped chest, free-standing on the four sides, were statuettes of the guardian goddesses, Isis, Nephthys, Neith, and Selkit. The shrine-like chest shielded the Canopic box, which in turn contained the four receptacles that held the viscera of the dead king.