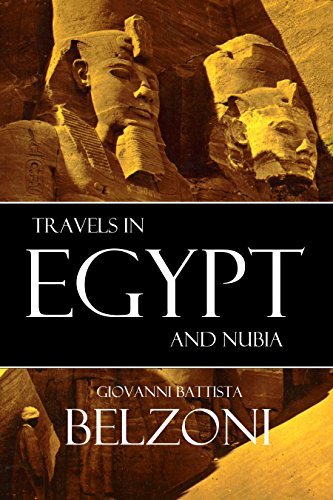 A circus showman turned adventurer, explorer, and archaeologist, Belzoni is still a giant in the history of the exploration of Egypt. Long considered a treasure hunter, modern archaeologists give Belzoni credit for having carefully recorded much of his work. Working before the age of modern archaeological methods, he nevertheless made major contributions to our understanding of ancient Egypt.

Belzoni was the first modern person to enter the pyramid of Khafre (the middle pyramid) at Giza, where his name can still be read today in the burial chamber. He discovered the gorgeous and enormous tomb of Seti I in the Valley of the Kings and did explorations at Abu Simbel.

…every step I took I crushed a mummy in some part or other. Once I was conducted from such a place to another resembling it, through a passage of about twenty feet in length, and no wider than that a body could be forced through. It was choked with mummies, and I could not pass without putting my face in contact with that of some decayed Egyptian, but as the passage inclined downwards, my own weight helped me on: however, I could not avoid being covered with bones, legs, arms, and heads rolling from above. Thus I proceeded from one cave to another, all full of mummies piled up in various ways, some standing, some lying, and some on their heads.

This book is a must read for anyone interested in ancient Egypt or early exploration.