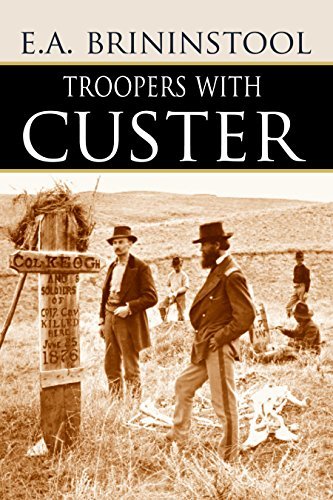 He was a cowboy poet whose legacy is that of “Custer scholar.” Born on October 11, 1870 in New York, much of Earl Alonzo Brininstool’s life was spent across the continent in Los Angeles. He met, interviewed, and corresponded with many of the survivors of the disaster at the Little Bighorn, and Custer scholars who have followed have all referenced his work.

“We, the enlisted men, the survivors of the battle on the heights of the Little Big Horn River, on the 25th and 26th of June, 1876, of the Seventh Regiment of Cavalry, who subscribe our names to this petition, most earnestly solicit the President and Representatives of our country, that the vacancies among the commissioned officers of our Regiment, made by the slaughter of our brave, heroic, now lamented, Lieut.-Col. George A. Custer, and the other noble dead commissioned officers of our Regiment, who fell close by him on that bloody field, daring the savage demons to the last, be filled by the officers of the Regiment only. That Major M. A. Reno be our lieutenant-colonel, vice Custer killed; Capt. F.W. Benteen our major, vice Reno promoted.”—From Troopers with Custer

This is still one of the best Custer books available, cited by many Custer scholars.