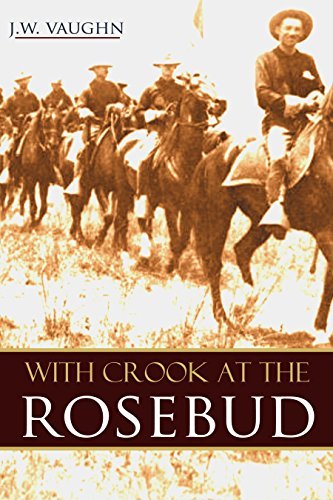 On June 17, 1876, just eight days before the disaster at the Little Bighorn, Sioux and Cheyenne warriors led by Crazy Horse attacked an 1,100-man U.S. Army force under General George Crook at Rosebud Creek. Though considered a draw, Crook and his soldiers withdrew after a day of fighting. This is the only comprehensive study of a battle that was second in importance only to the Little Bighorn in the Indian Wars.

Few Americans today have ever even heard of the fight at Rosebud Creek, coming as it did only a week before the disaster at the Little Bighorn, where George Armstrong Custer and hundreds of Seventh Cavalry soldiers died. But the Battle of the Rosebud is one of the most important conflicts of the entire period we call the Indian Wars. It was fought by the same Native American forces that would later decimate Custer and it was fought on their terms. They were the attacking force on terrain of their choosing. The action forced General Crook to withdraw and request reinforcements and resupplies.

Excerpt from the narrative

John Stands-In-Timber, the Cheyenne Recorder, claims that Crazy Horse’s warriors, reinforced by the late arrivals, drove Crook’s men back to the willows bordering the Creek, a claim substantiated by the friendly Crow subchief Many Coups. According to both accounts, the retreat was almost a rout. However, the cavalry and infantry were finally rallied to make a counter charge. John relates that the fighting was heavy around the camp site at this point. The fact remains that numerous discharged soldiers’ shells have been found on both sides of the Rosebud here.